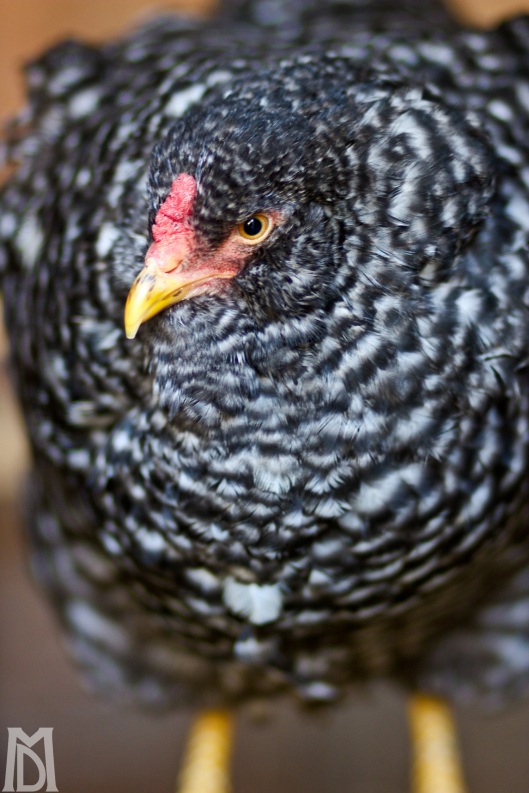 Aliena is one special chicken.

She has survived diseases and injuries that would have killed (and did kill!) other chickens. I had written her off as dead so many times but every time she pulls through. Aliena is a wonder chicken. Just writing about her gets me choked up. Yeah, I’m that kind of chicken owner! But she isn’t even my hen, she is Benjamin’s baby and I think it is their bond that gets me so emotional. Aliena and Benjamin have been through incredible physical distress (Ben has had four knee surgeries) and both of them have emerged from hardship stronger than before. They give me the optimism that you really can survive anything with the right attitude.

Aliena was hatched right here at home. Her mom was Jenny; the previous chicken of the week. Jenny was a crazy mother hen. She would mistakenly sit on her chicks, push them out of the way when there was food and sometimes step on them. Then she almost killed Aliena!

It was summer and we had put Jenny and the two-week-old chicks outside in a fenced pen. A neighbor’s dog came into the yard and Jenny went NUTS. She started attacking everything around her and Aliena got caught in the crossfire. Ben, Dad and I ran out to help and there was poor little Aliena in a pool of blood. Her neck was perfectly split open, but her arteries were intact. Only her skin was sliced but she was loosing too much blood. Jenny still hadn’t noticed and was running around like a crazed fan at a Justin Bieber concert.

Ben and I scooped her up and rushed her inside. I told him we would do what we could but that she would probably die. Naturally at this point she started peeping in pain. I could see Ben’s heart breaking. Having not grown up with chickens, and a plethora of animals, he had never seen a creature injured in such a violent manner. “We’ve got to do something!” he quivered. I rinsed her wound and treated it with an antiseptic. I considered stitching her up but the wound was too big and she was far too young. I put cornstarch and pressure on the wound but the blood kept coming. I passed her back to Ben and told him I had done everything I could. He stood there with this dying chick in his hands peeping away and just looked down with tears swelling in his eyes. Then I went outside to clean up the chaos with Jenny.

When I came back in Ben and Aliena were nowhere to be seen. I walked around until I heard a noise coming from the basement. “We’re down here” called Ben. I ran down to join them. Ben had placed Aliena into a box with a heat lamp, food, water and a bundle of soft towels against which she was nestled. “See I created an artificial broody hen for her to snuggle against!” Aliena still looked like she was on her way out of this world. Her eyes were closed and her little feathered body was barely moving. “Don’t get to attached Ben. She won’t make it overnight.”

The next morning Ben ran down to check on Aliena. “Mattie! Mattie!” I followed him into the basement. Aliena was still snuggled against the towels but she was alert and peeping. “She lived! She made it through the night!” Ben was glowing. I was dumbfounded but noticed she hadn’t eaten or drunk anything. I kept my mouth shut. Ben stayed down with her for an hour.

Then that afternoon we lost power. Aliena’s heat lamp was gone! I went down to talk to Ben. “Ben, Aliena needs heat at this age. If we don’t get power back she won’t survive.” “Already taken care of!” Ben had taken the towels and stuffed them with a bunch of my hand warmers. Aliena was snuggled even closer to the towels.

Aliena made it through that night too. The next day she ate and Ben was there to keep watch. The two bonded very strong. Soon she was hopping out of the pen to sit on his lap. When she got old enough she started hopping on his shoulder and roosting. He could walk around with her fast asleep on his shoulder. They had both proven me wrong. I’m still dumbfounded that she lived through such a gruesome injury. (Video below of Aliena sitting on Ben)

Soon she was big enough to rejoin her siblings and Ben put her out in the baby coop. Then tragedy struck again! Two of the chicks, including Aliena, came down with coccidiosis. The disease killed the other pullet but Aliena pulled through!

Since then she has survived two other diseases and has lived through having an impacted crop. Each brush with death has left her a little more tattered looking but she is still living and laying!

To this day she still runs to Benjamin. If the other hens are chasing her she will jump into his arms or onto his shoulder. Then Ben will chase off the offending hen while yelling at them about manners. They are quite the pair!

I’ve decided to finally do something with all of the chicken photos I have clogging up my hard drive. From now on http://www.growingupjulia.com will have a featured chicken of the week. For our first chicken we have “Jenny” a four year old hen with a penchant for obsessively digging holes. 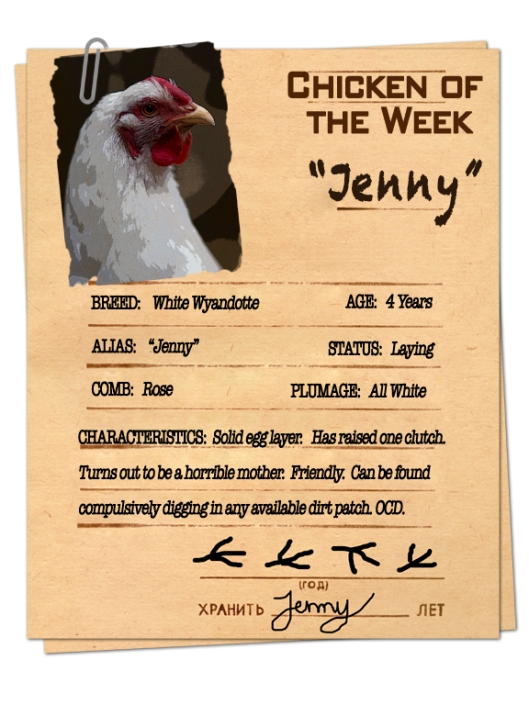