While recovering from my recent illness there was one food item that stood by me and nursed me through the ordeal. Something delightfully simple, greatly loved and used, something so widely available that I had never thought to make it at home. The flour tortilla!

I have an unstable relationship with Mexican food. With my sensitive stomach, Mexican and I do not always end the night on a good note! Despite that I have a weak spot for burritos, quesadillas and just munching plain tortillas.

A friend, who grew up in New Mexico, spoke fondly of the tortillas of her childhood. She longed to recapture that distinct flavor she remembered from her babysitter’s homemade flour tortillas. She recently began making her own and encouraged me to start testing recipes alongside her.

For about a month we have both made tortillas twice a week and used them for everything from burritos, tortilla chips and breakfast wraps. In all of our recipe research, I kept coming across comparisons of the Tex-Mex tortilla versus the traditional recipe. My friend was questing after the Tex-Mex flavor while I found myself leaning towards the traditional tortillas. After many different recipes and a plethora of ingredients I settled on two recipes representing the two different types of flour tortillas.  To represent the traditional tortilla I went with an adaptation from The Joy of Cooking. I found this recipe did best when I made the tortillas with lard. (Recipe and images below) To represent the Tex-Mex tortilla I found a fantastic recipe at http://homesicktexan.blogspot.com/2007/03/and-end-to-my-quest-flour-tortillas.html

Armed with these two recipes I decided it was time for recipe battle. Time for these two styles to go head to head in Tortilla Takedown! So I invited some friends over and started to cook up a huge batch of both. We served the tortillas as burritos but made everyone do a blind taste test of just the tortillas. The results? 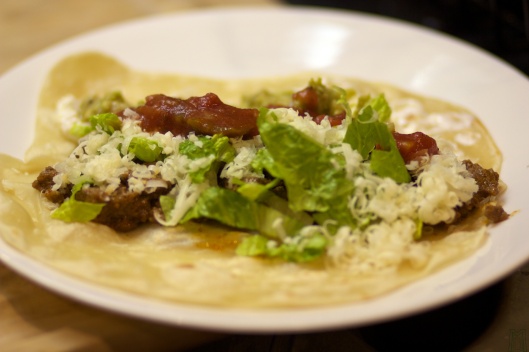 Well first off I had an even number of friends show up. Darnit! To make matters worse the tortillas tied. The interesting twist is that the women all preferred the traditional lard tortillas while the men all went gaga over the Tex-Mex tortillas. Makes you wonder about gender differences and what we all were missing in our diets or lives! The two groups were each equally passionate about their preferences to boot. So I decided to use my parents as the tiebreakers.

With my fingers crossed that they wouldn’t follow the gender pattern, I served the tortillas to my parents. Lo and behold we had a winner. The traditional tortilla rose above with my parents preferring the lard tortilla and happily helping themselves to the leftovers.

With that I crowned the traditional tortillas the winner and have been making them exclusively ever since! 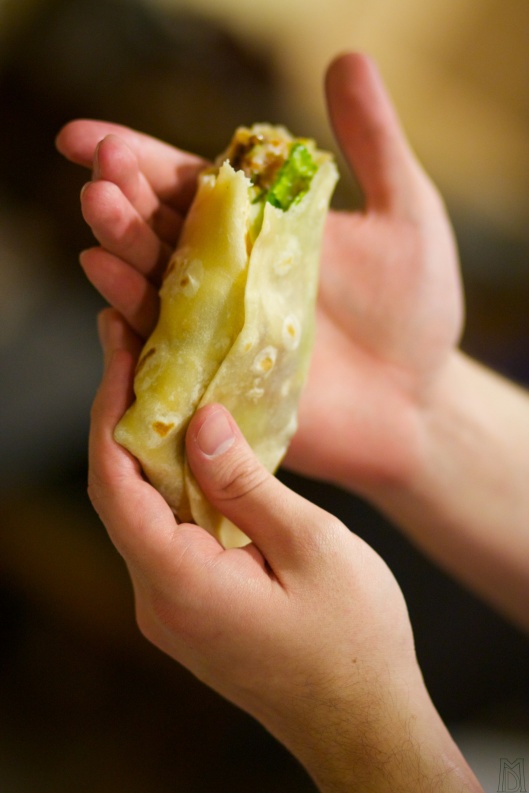 Flour Tortillas (adapted from the Joy of Cooking)

Combine all the ingredients in a large bowl or in a heavy-duty mixer.

Mix by hand or on low speed until the dough comes together into a ball. Knead by hand or with a dough hook for 4 minutes.

Divide the dough into eight pieces and roll them into balls. Let them rest, covered, for twenty minutes.

Roll out each ball of dough into a 6 – 8 inch round about 1/8 inch thick. If the dough fights back or is overly elastic set the round aside and let it rest an additional ten minutes.

Heat a large cast-iron or non-stick skillet over medium heat. Slide the tortillas, one at a time, into the skillet. Cook until brown spots appear, about 30 seconds on the first side and then 15 seconds on the other side. Cover the cooked tortillas to keep warm and then serve. 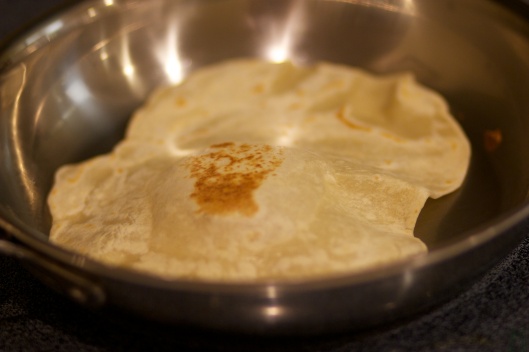